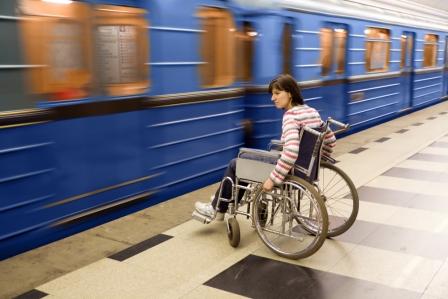 What do we mean when we say disabled? There are at least two ways to answer this question. Until recently, the medical concept of disability was predominant. According to that concept, a disabled person is the one who, due to a disease, can’t do all the same as a healthy person. To put it simpler, it’s a person having difficulties with walking, hearing, sight, etc. However, there is also another, the so-called bio-psychological concept of disability. It was originally worked out by associations of the disabled themselves and represents a look at the problem, so to say, from within. It is this concept of disability that most developed countries abide by, and it is this concept that the government of the Russian Federation considers apriority in forming its social policy. According to this social policy, it is not some disease that makes one disabled but the impossibility to enjoy all the creature comforts in the same way as all the others.

Where do we need accessible (friendly) environment?

Among other measures meant to make the environment more friendly to hearing-impaired people, developers of regional programs suggest the following:

–        increasing the number of sports facilities accessible to the disabled and the number of hearing-impaired people participating in Paralympics;

A new direction in which Aurica specialists are working to implement the federal program is equipping public places and infrastructure objects with induction systems. These are modern devices targeted at facilitating auditory perception by hearing-impaired people. Induction systems can be installed in a room of any size – from a small classroom to a big train station or airport. They allow all the hearing-impaired people present in the room to hear the information that all the people with normal hearing ability can hear through loud speakers.

Aurica has already made the first steps in this direction: at the end of 2012 we installed induction systems in the halls of Domodedovo airport. That was the first object of such big scale in Russia to be equipped with supportinginduction systems. Hopefully, our efforts will make the projects of accessible environment come true as soon as possible.