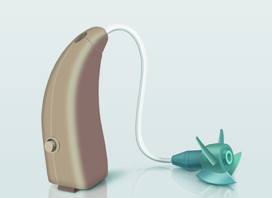 Statistics show that many hearing-impaired people won’t use a hearing aid or have significant difficulty choosing one. One of the main demands made to a hearing aid is that it should be compact and unnoticeable. Many patients refuse to wear a hearing aid for fear that it will be visible to other people and make them the object of mockery. Others are dismayed by the information that hearing aids are notefficient enough: they don’t provide adequate accuracy of sound transmission, they “whistle”, they distort the owner’s voice etc. Many people also believe that in choosing a hearing aid one has to make a choice between sound quality and attractiveness.

However, today allthis isirrelevant. Technological progress in the sphere of hearing loss correction has achieved a level at which almost all the enumerated problems can be solved simultaneously. And as technological innovations are promptly adopted by all the leading manufacturers in this country and abroad, last-generation hearing aids very quickly become available to an average customer at reasonable prices. One of such revolutionary innovations deserving special attention is RIC technology. 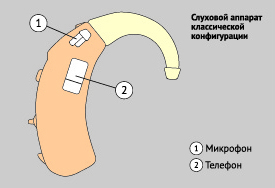 RIC stands for “receiver in the canal”. Receiver, also called telephone, is the element of a hearing aid whose function is to transmit sound directly into the user’s ear. To make it clear what RIC technology is about, let’s compare a RIC hearing aid to a regular one. In a hearing aid of classical configuration the receiver is situated inside the case – right next to the microphone, another important element of the hearing aid responsible for picking up sounds. In a RIC hearing aid the receiver is situated outside the case. It is placed in the outer ear canal and connected to the case by means of a flexible tube. This seemingly unimportant modification in the hearing aid configuration has allowed developers to achieve significantly better performance. 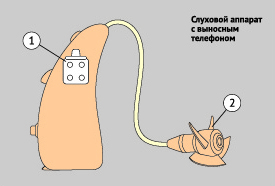 The most significant advantage of an RIC hearing aid is diminished chance of feedback. Feedback effect that many users know so well as the typical unpleasant “whistling” in the ear arises because of the adjacent position of the microphone and the receiver. Putting the receiver at some distance from the microphone allows to almost totally eliminate this effect. As a result, using an RIC hearing aid you can be practically sure that you will not hear that irritating and distracting whistling. Placing the receiver in the ear canal also helps to reduce the chances of  hearing distracting background noise or experiencing echo effect.

One more unpleasant “side effect” associated with amplifying sound by means of a traditional hearing aid is occlusion effect. The latter is perceived as stuffiness in the ear and distortion of the user’s own voice (it is often described as “speaking into a barrel”). Studies show that using an RIC hearing aid also practically eliminates the occlusion effect.

Finally, the decision to place the receiver in the ear canal helped to make hearing aids more compact. An RIC hearing aid is almost unnoticeable in the ear, and for many users – especially young ones – that is one of the most important qualities in a hearing aid.

The absence of irritating interferences and distortions makes the process of sound perception via an RIC hearing aid more comfortable as compared to traditional hearing aids. Sounds amplified by means of such aids remains clear and maximally legible in any acoustic situation.

A hearing aid made using the receiver-in-the-canal technology allows its user to forget about such unpleasant side effects as whistling sound, occlusion, unnatural or illegible sound. If you have become an owner of such an aid, you can forget about all discomfort. You won’t  have to strain in order to hear what the other person is saying; you won’t have to ask him to repeat his words just because you were distracted by whistling or echo in the aid’s receiver; you won’t be afraid that your hearing aid will attract unwanted attention. RIC hearing aids represent a happy compromise between an attractive appearance and a high quality of sound – and as such, they are able to satisfy even the most demanding customers.

1. Precise sound localization. When hearing aids are used in binaural way, its very easy to pinpoint the sound source END_OF_DOCUMENT_TOKEN_TO_BE_REPLACED

Suzdal invites audiologists for a congress